Social activist Majaibung Gangmei blames Railway Department for neglecting Geological survey Reports that eventually led to Noney Landslide on June 29 which caused loss of lives. Speaking to media persons, Majaibung Gangmei said that according to a survey report by the  Geological survey of India on 2013 & 2017, the landslide zone area was reported as not fissible area. He also said the villagers received signals about the landslide and even the geological survey of India sent scientist from Shillong to look into the matter in which they gave warning to evacuate the villagers from the area.
However, the railway department authorities did not infrom the villagers about the warnings which eventually led to the landslide and the loss of lives. He said, in the incident only 5 villagers loss their lives and because of this limited number of persons there were not much issue from the local villagers about the matter. He also mentioned that the site is  still in danger and requested the government to keep the pace as reserved area. Lastly, he also thanked DC, SP and the prople of the state for rendering help to the people of the district regarding the unfortunate incident.
Share ! 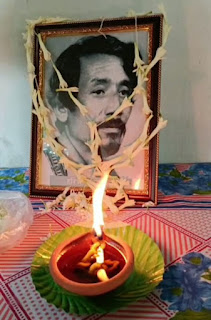 'Krantikari Kavi' Hari Bhakta Katuwal, one of the brightest gems in the history of Gorkha Bhasa literature was born on July 2, 1935 in a small village called Bogibeel in  Dibrugarh, Assam. He read and wrote poems in Gorkha Bhasa, English, Hindi and Assamese. Hari Bhakta Katuwal received his formal early education in an Assamese medium school and as a result Assamese poetry had a deep influence on him but the fact that he was also the loudest voice in the realm of Gorkha Bhasa poetry during the 60s and 70s from the northeast region is not an exaggeration. It was in Digboi during the late 50s when Katuwal was teaching in A.O.C. Nepali M.E. School that he attained a new glory in the spheres of Nepali literature and culture. This was a period of literary and cultural renaissance in Digboi as there started the circulation of reputed Nepali journals and newspapers from literary hotspots of the time like Darjeeling, Banaras, Dehradoon and Kathmandu. In fact the then literary works and writers from Darjeeling inspired him a lot.

It is for the first time such an intellectual interactive session was organised in Cotton   University. The students of Post Graduate Diploma in Nepali language along with students of various department also attended the event which was anchored by Milan Bhattarai. Dr. Srijana Sharma, Assistant Professor, Centre for Language Culture & Art (CLCA), Cotton University and Dhakaram Kafley, Guest faculty of Nepali language at CLCA Cotton University attended as Guests. Speaking at the event Dr. Khagen Sarmah emphasized on recognizing Katuwal with a 'Title' by the Assam Nepali Sahitya Sabha (ANSS)- the only literary body of Gorkhas in Assam. He also felt that atleast thirty of the best of his poems and lyrics should be translated into other languages and compile a book of his Patriotic Poems and lyrics that caused revolution that's why youth called him Krantikari Kavi. He requested Cotton University students the epicenter of students and youths empowerment to initiate this movement.

Elaborating this ita Devi Dewan an advocate in Golaghat who recently wrote about Hari Bhakta Katuwal said, 'This patriotic poem is one of the cause of Gorkha renaissance in Assam. It's a poem filled with patriotism with a message of supreme sacrifice at any time for the nation where he sweat and blood.'  Katuwal's life was influenced due to his friendship with Bhupen Hazarika since they were born and brought up in Eastern Assam . Some author has shared anecdotes between them that they were friends as cattle rearers and  learning to consume home made beverages.

'I was interested to explore 'Krantikari Kavi' for his relations with Jajabor Bahrat Ratna Dr. Bhupen Hazarika. It is widely believed and accepted that it was Hari Bhakta Katuwal who had crowned Bhupen Hazarika with the Gorkhali Bhadgawley Topi (particular cap worn by Bhupen Hazarika ) and it remained with the legend maestro till his death and still kept at Bhupendra Sangrahalay in Srimanta Sankaradeva Kalakshetra and jajabor's Jalukbari museum. This made me write an extensive article on Hari Bhakta Katuwal with his life sketch and work.'

Katuwal wrote his poems with great revolutionary zeal and the subject matter largely revolved around patriotism, sacrifice of the Gorkhas in nation building, cause and sufferings of the Gorkhas, Racial consciousness, nationalism, rights needed to be asserted for the safeguarding of the Gorkhas and so on. He was awarded by the Royal Academy for his poem 'AKASHKA TARA KE TARA'. It was in the year 1973 that he came out with what his now dim literary prowess still finds a flame of reassurance - his collection of poems, 'YO JINDAGI KHAI KE JINDAGI'. It is one of his most significant works and a landmark contribution in the history of Nepali literature.

Kabita Katuwal elder daughter of Late Hari Bhakta Katuwal expressed hapiness to see her father being given 'Krantikari Kavi' pen name or title by Bharatiya Gorkha Yuva Parisangh that was proposed almost a decade ago. ' My father Hari Bhakta Katuwal was keen interest in painting is also discernible in the poet. His paintings were highly admired by the people. He was unequivocally a great poet but he was a lyricist of equal merit. His ''Malai Nasodha Kahaan Dukcha Ghaaw'' and  ''Pokhiyera Ghaamka Jhulka Bhari Sangharaima'' are still the favourites among the youths of 21st century. he great poet spent even his last days (late 70s) in forging something new for  Nepali literature. In its aim of attacking the varied ills of society and the blows and counterblows of life , his poetry has touched the reader's pain. Thus, his poetry has become the poetry of a common man.', added Kavita Katuwal.

Similar events were held across Assam at Rongbong and Kohra in Golaghat, Margherita in Tunsukia by Assam Nepali Sahitya Sabha (ANSS) and at Rowta in Udalguri, Tezpur in Sonitpur by AAGSU on Saturday and Sunday.

MYANMAR:Aung San Suu Kyi has been seen for the first time since Myanmar's military coup a month ago. The ousted leader appeared in court on March 1 via video link, where she has been charged with two more criminal offences. Meanwhile, protesters marched in defiance of a crackdown that killed at least 18 people over the weekend. The United Nations said it is the highest single-day death toll since the February 1 coup, but the army said it has exercised restraint to keep casualties to a minimum.
Share !

IMPHAL (DIPR): Health & Family Welfare Minister Shri L. Jayantakumar today visited quarantine centres established to curb the outbreak of COVID-19 pandemic located at different places of Imphal West and Imphal East district. Minister also distributed PPEs, Sanitizer, N-95 masks and Gloves for the health workers at the quarantine centres as supplementary protective back-ups. He also interacted with the health staffs stationed at the respective quarantine centres and discussed the feedback from them.
Minister said that there may be lack in adequate number of health workers and supporting staffs at the Quarantine Centres. However, the Government, specially, the health department is trying its level best to increase the number of health workers and supporting staffs at the earliest so to enable proper functioning of such centres. He also appealed the present health workers and staffs to cooperate for the time being since health department have already chalked out to engage skilled and unskilled health staffs.
Minister added that the Ministerial team will continue to visit the remaining quarantine centres located in different districts as a regular activity of the Health Department, Manipur Additional Director (Health), Dr. Arkey, mentioning the possibility of increase in number of COVID-19 positive cases to a large number, said that the department has identified UNACCO School, Metram to covert as a COVID Care Centre of the State and for the first phase, it will be converted into a 100 bedded COVID Hospital. In this regard, the department has prepared for the necessary steps to be taken up.
Today visit included Jawaharlal Navodaya Vidyalaya, Yaralpat, Imphal East, IIIT, Mantripukhri, COVID-19 Screening Centre at Oriental College, Tera, Imphal West and UNACCO School, Meitram.
Minister was also accompanied by Deputy Director (Health), Dr. A. Probin, Dr. Somendro and other health staffs.
The Citizens' News is now on Whatsapp. Click here to join our channel @thecitizensnews and stay updated with the latest headlines
Share !
Older Posts Home
Subscribe to: Posts (Atom)