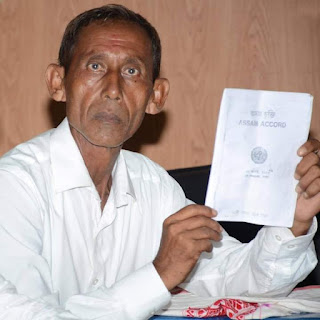 Pillars of Society Award 2021-2022' an international recognition by the INGO Social Justice for International Civil Rights Council (SJFICRC) working in social justice domain in association with National Anti Crime and Human Rights Council of India affiliated to Ministry of Social Justice and Empowerment, Government of India is being given to Harka Bahadur Chetry, Chairman of Gorkha Autonomous Council Demand Committee (GACDC) for being indigenous Gorkha community rights crusader over three decades in the state of Assam.

Dr. Diwas Lama one of the founder and Director of SJFICRC stated in a press statement that Social Justice for International Civil Rights Council (SJFICRC) affiliated to Department of Economic and Social Affairs (DESA)’s civil society of United Nations (UN) and National Anti Crime and Human Rights Council of India (NACHRCOI) affiliated to Ministry of Social Justice and Empowerment, Government of India is giving away awards in ten categories to awardees from eleven nations at an international award conference focusing on Indo-Nepal relations. The award conference ‘International Indo-Nepal Friendship Award 2022’ will see presence of ambassadors and chief of the mission of award winning nations where A Narayana Swami, Minister of State for Social Justice, Government of India and John Barla, Minister of State for Minority Affairs Government of India will be present as Chief Guest and Guest of Honour to give away the award besides a galaxy of dignitaries. Chetry will be presented ‘Pillar of Society Award 2021-22’ with awardees of other segments from different countries at Constitution Club, New Delhi on 19th Aug 2022 at 3pm. 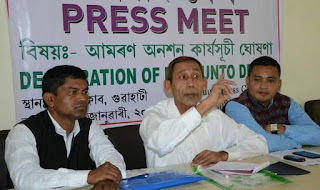 Talking to this correspondent Dil Bahadur Limboo Senior Vice President of GACDC said, ‘Congratulations to the indigenous fearless real leader of Gorkhas of Assam spearheading the Raithaney Sangram (Indigenous movement) thinker of Gorkha Autonomous Council (GAC) in Assam. Proud to be his colleague in GACDC and AAGSU since 1996 when he was first elected president of All Assam Gorkha Students Union (AAGSU). Since then it’s my honour and pleasure to have always received his encouragement, guidance and support not just in social service but also in life. Glad to be have been working as community leader and doing impactful social work under his mentorship since two decades.’“'Pillar of Society Award 2021-22' by an International NGO working in social justice domain to our chairman is testimony to the fact that GACDC's movement for Indigenous Identity and Gorkha Autonomous Council (GAC) is not only legitimate but also in high spirit and right direction towards social justice.”, added Limbu who was the president of AAGSU in 2010. 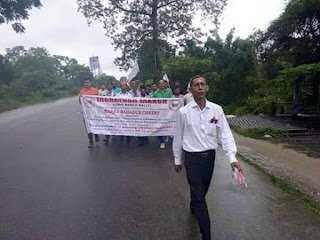 Harka Bahadur Chetry expressed gratitude to the jury and international NGO who has chosen him for the recognition and told that it came as surprise for him since he never expected any award for the movement he lead since 1996. Chetry left for New Delhi this afternoon from Dibrugarh along with GACDC vice president Bhoj Raj Karki who has been his colleague since 1999 after the formation of GACDC. Bogiram Gorkha Bhandari an Indigenous Gorkhalism and Gorkha Bhasa activist wrote a lengthy facebook post recalling Gorkhafa’s three decades of movement recent one being 650 kms Marathon March ( Long foot march from Murkungselek Jonai in Dhemaji to Dispur in Guwahati ) in 2016 which lead to bipartiate Home & Political Affairs Secretary & Commissioner level talks between GACDC and Government of Assam on granting indigenous status to Gorkhas of Assam vide Gazette Notification which is still on. Durga Khatiwora president of Assam Nepali Sahitya Sabha (ANSS) expressed happiness over the recognition and congratulating Chetry for the award said, ‘Harka Bahadur is the person who dreamt of an autonomous council for Gorkhas when he became president of AAGSU in 1996 and resolved at their annual conference at Boginadi Higher Secondary School in North Lakhimpur Dist in 1997 for self determination and indigenous identity of Gorkhas in Assam’. Arjun Chetry and Numal Chetry president and general secretary AAGSU too congratulated GACDC chairman for the award. Bharatiya Gorkha Parisangh (BGP) Assam state gen secretary Bimal Pradhan said, ‘Honour in the form of an award by an INGO is recognition of his leadership skills and vision since it is called Pillar of Society, the name itself is self explanatory. BGP on behalf of Gorkhas of the nation congratulate the awardee Chetry for bringing recognition and laurels in social  justice category as a community leader’. Leaders of Gorkha Community organizations Kirat Rai, Mahasabha, All Assam Magar Union, All Assam Gurung Tamu Union,  Limbu Mahasabha, Assam , Akhil Assam Newar Sanghathan, Akhil Assam Gorkha Biswakarma Samaj and other civil society organizations (cso)s congratulated Gorkhafa for earning recognition. His AAGSU, GACDC colleagues in different associations and unions and counterparts in other community organisations too congratulated Harka Bahadur Chetry for the international award in social justice instituted and given by a reputed INGO.