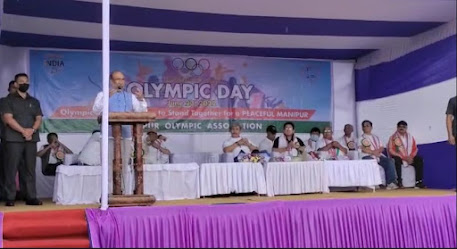 As observed in many parts of the world, Manipur Olympic Assosiation organised World Olympic Day at Khuman Lampak. Chief Guest of todays’ function CM N. Biren stated that whenever any player from the state take part in tournaments which are held  outside state or outside country, state Govt increase the TA/DA money from 200 to 300 for each and every player.

CM said that Manipur was in worse state possible in the past recent years. He mentioned the conditions of the people during that time where people struggled to overcome the era of drugs and HIV/ AIDS and said that sports and players save the state and the people to overcome such drastic condition.

Further, he stated that Government provided funds worth 1 crore to 3 clubs viz. NEROCA, TRAU, KRYPSA and also to develop playing grounds in 16 districts under Khelo India. CM also assured to build statues of 16 players of Manipur and organise State Level Polo Tournament to save the prestigious Pony of Manipur.