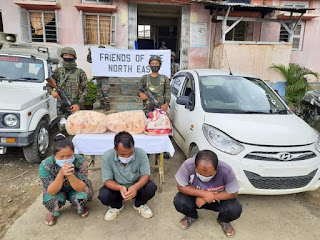 Churachandpur police today seized 2.437 kgs of heroin while the consignment was enroute to the district from Chandel following a reliable input, sources said. A team of the district police led by Inspector N Thangzamuan OC of Churachandpur PS along with 31 Assam Rifles launched a joint operation under the supervision of Addl. SP (Ops) Lawrence K Munluo and SP-CCP Shivanand Surve at about 10 am today.
The operation was launched based on a reliable input that one Bapin of Moirang area is transporting contraband drugs to the district, said the source. At around 10.30 am, the joint team spotted a numberless Hyundai i10 white car moving towards CCpur at Kangvai and intercepted it for verification. As the team sought to ascertain the items carried by the car, 189 packets of suspected heroin were found concealed in two Huggies (Diaper) plastic packets, three white plastic packets and three black plastic packets.
The contraband which was found to weigh 2.437 kg was immediately seized and the two occupants detained. The detained individuals identified as Shokhogin Haokip (45) s/o Otkholun of Bethel village, Chandel district, and Mrs Tingneikim (40) w/o Shokhogin Haokip reportedly told the police that they were transporting the drug as directed by Bapin while the latter had gone ahead of them to strike a deal.
The police followed up the case, and Bapin was located at Red Cross road, New Bazar, CCpur. He was soon arrested and identified as Longjam Bapin Meetei (27) s/o L Boinao of Pangei, PS-Heingang, Imphal East. The Churachandpur police have registered a case under FIR No.73(7) 2021 CCP-PS u/s 21(c) ND&PS Act.