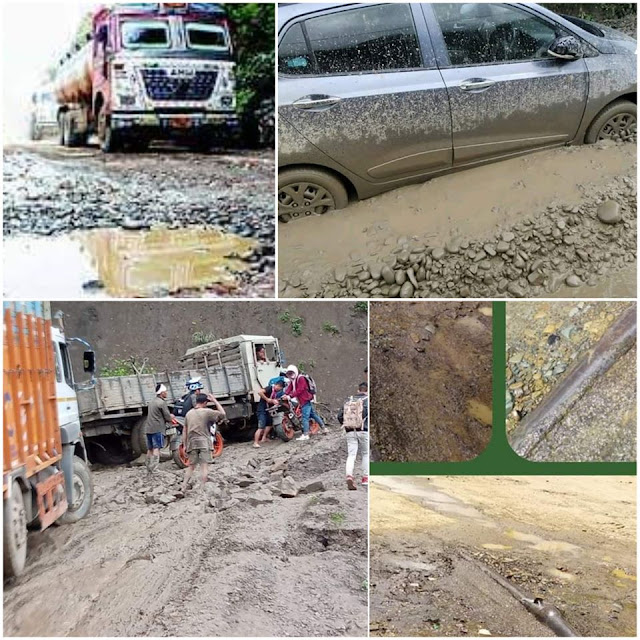 IMPHAL: Decrying utter and prolong negligence of NH-2 conditions, many has expressed resentment over the pathetic conditions of the highway stretch between Motbung and Sapermeina. Concerned citizens including locals, truck drivers, ambulance drivers, officials on duty for different departments and COVID-19 along with citizens passing through the stretch everday has raised serious question over the non-development of the most depended which is considered as “Lifeline of the State” highway.
Recently, Transport organizations and concerned NGOs has also called for urgent attention of the State Government and the PWD department.
Sanjeev Bir Singh a truck driver ferrying essential commodities to Manipur complained that, the poor condition of the said stretch of road is worsening each day with no signs of repairing. Another local K. Haopu resident decried that, some months back few workers from Imphal were seen dropping mud and stones but suddenly stopped the work and disappeared from the work site for reasons unknown.
Ambulance driver on request for anonymity stated that, transporting patients between Motbung and Sapermeina stretch is stressful and time consuming.Moses Ambii from Senapati questioned as to why the developmental works on such small areas on NH-2 has been neglected for so long by the concerned PWD department and the company despite completing all process of tender and awarding the work. Some Office goers to Kangpokpi & Senapati supplemented that, “Most of the places between this said areas are now filled with knee deep pitches making the road unmotorable but compelled to use in necessity”.
The said stretch is only some 10 kms but at its worst, another added.Another Student’s leader noted that,repeated appeal and reminders has been delivered to State Government in the past since last year but the grievance has never been addressed till today.
However, the highway stretch between Koubru Leikha and Maram undertaken by BIPL has been completed.It questioned as to how despite good condition,repeated black-topping works were executed especially in greater Imphal areas between Koreingei and Airport while the main lifeline highway rots in total negligence.Such attitude of the concerned department and work agency is only provoking the People’s sentiments, it added.
—