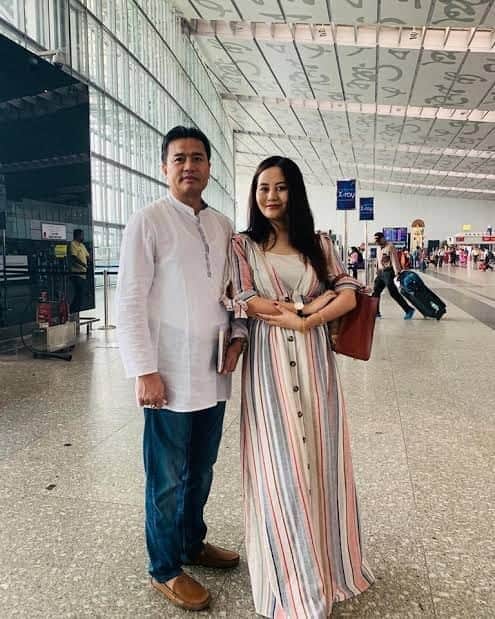 IMPHAL: Court summons Minister Th Bishwajit and his wife Junreiwon Lunghar to appear before the Judicial Magistrate First Class, Imphal West Court on August 4 in connection with a Criminal Miscellaneous Case filed by Rebecca.
Rebecca has lodged a complaint before the court under section 12 of the Protection of Women from Domestic Violence Act, 2005.
The court after hearing the complaint has summoned Bishwajit and Junreiwon to appear in person or by pleading duly instructed and able to answer all materials questions relating to the complaint on or before August 4 at 10. 30 AM.
Rebecca, the complainant stated on the complaint that she is married to minister Th Bishwajit in the form of Keina Katpa (offering of bride to the bridegroom under mutual consent) in the presence of friends, family and relatives, in November 2018. Presently, she is taking shelter at her parental home located at Nagamapal Singjubung Leirak after being driven out by Bishwajit from her two shared households located at Thongju Ningom Thongjao and another at Gahri Awang Leikai. After Keina Katpa, they have been living in a shared household at Thongju. But, his first wife Junreiwon was not there as she had eloped with another person during the subsistence of her marriage. However, Junreiwon came back to the shared household in December 2019 by leaving another person. From the day Junreiwon started torturing Rebecca psychologically and emotionally by blaming that Rebecca is the bringer of all negatives and that the death of his nephew namely Thongam George was caused by the result of the marriage. And at the same time, Bishwajit used to comment that Rebecca is a possessed woman of evil spirit and because of which all untoward incidents have befallen on his family. He further blames her of his father’s sickness by possesses of evil spirit. Such comments and name-calling has made Rebecca suffer from immense psychological and emotional pain.
Rebecca on complaint alleged Junreiwon that she slapped and assaulted the complainant. And in fear of staying the complainant invited her cousin to stay with her. However, Junreiwon insulted her cousin by stating that they are shameless people who have come to stay at a shared house. She had been at the hospital due to Bishwajit families and Junreiwon assault. The mother of the complainant even lodged a complaint to Singjamei PS.
Bishwajit pressed the complainant to withdraw the FIR case registered against his first wife. After that Bishwajit stopped communicating with her, the complainant was under medication for about two months. The complainant mother out of sheer intolerance lodged a complaint to the Manipur State Women Commission. However, the chairperson visited the complainant residence and pestered the complainant to file a divorce case against Bishwajit on the ground of Junreiwon being the first wife, as Junreiwon may take up legal case against them and the complainant may land up in prison.
As such in November 2019 the complainant, out of frustration and depression went for a trip to Shillong with her cousin. At Shillong, some people claimed as police personnel came to the hotel room where they were staying and started taking video to project the complainant of having extramarital affairs with other men in a sexually explicit manner. The videos went viral at social media sites, those men sent by Bishwajit based on the missing report kidnapped the complainant and brought him back to Imphal. She was taken to Ghari residence of Bishwajit and pressed the complaint to sign papers despite her resistance.