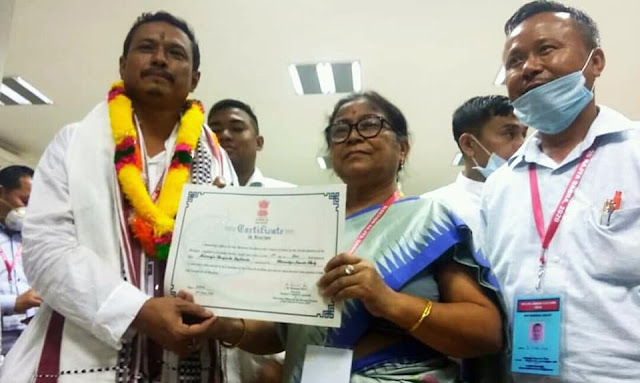 IMPHAL: The Bharatiya Janata Party (BJP) has won the lone Rajya Sabha seat in Manipur, securing 28 of the 52 votes cast on Friday.
The result of the BJP winning the lone Rajya Sabha seat came after a much delayed counting of the votes. The counting of votes was to start at around 5 pm, but was delayed following intervention from the ECI, sources said.
A total of 52 votes were cast for the lone Rajya Sabha seat which voting began at 9 am and ended at 4 pm after intense political drama over the alleged irregularities by the ruling party.
In an interesting turn of events, three of the seven turncoats of the Congress party, who are facing disqualification under the anti-defection law, and pledged support to the BJP, were allowed to vote.
Earlier, they were barred from entering the assembly by an order of the Manipur High Court.
In yet another bizarre twist, the lone AITC MLA who withdrew his support to the BJP-led coalition government headed by Chief Minister N Biren Singh and joined the Congress was disqualified to vote. As such, he was barred from voting.