One CRPF jawan killed in grenade explosion, another injured 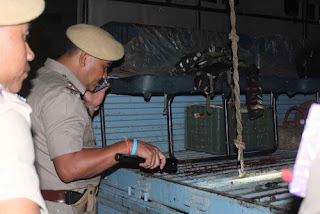 IMPHAL: A CRPF personnel was killed and another sustained seriously injuries when a grenade exploded inside a truck carrying supplies.
Police said the incident occurred around 6.10 pm near Nagamapal Phougeisangbam Leikai under the jurisdiction of city police station.
Both, the deceased and injured jawans were travelling in the back of a truck carrying supplies when the explosion occurred. Three CRPF personnel were sitting at the front while another two were sitting at the back which contained supplies. The truck was heading towards Chilchil training camp, Kanglatombi after having stocked up from Imphal market. Splinters from the blast also inflicted damaged to two car parked at the road side. Although the injured were rushed to RIMS hospital one succumbed to his injuries.
The deceased jawan has been identified as Umesh M Helavar (143 battalion) of Karnataka and the injured is identified as N. Ramarajan (109 battalion) of Tamil Nadu. The condition of the injured is said to be critical. The deceased had his right palm missing due to the intensity of the blast, police sources said that the man was holding the grenade when it exploded. However, the lever of the grenade (green colour) was found inside the truck only.
CRPF officials claimed that militant suspected attacked the truck carrying the jawans by hurling a grenade inside the truck carrying.
“I heard a loud bang and rushed outside to see what was going on. When I came out I saw a military truck park near the road side and people panicking amidst the busy traffic. I came to know it was a blast when I saw injured jawans in the truck”, said a local from the blast site.
Meanwhile, Manipur Chief Minister N. Biren Singh, during his visit to console the injured at RIMS hospital said he ‘strongly’ condemned the incident before assuring that his government will hunt down the perpetrator.
“The last one year was quite peaceful and suddenly this incidents. This is very unfortunate. The CRPF personnel were getting their supplies just like other normal peoples. Moreover, the incident was carried in a busy market crowded with innocent civilians. I strongly condemned such act. We have started taking actions”, said N. Biren Singh.
The incident comes a day after miscreant exploded a low intensity bomb in Kangpokpi district along the National High 102 hours before Manipur Chief Minister’s visit to the district. No one was injured in the blast.
Source: Imphal Free Press