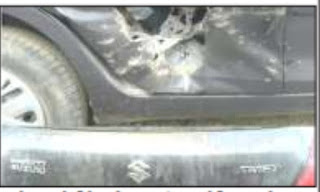 IMPHAL:Hours before the visit of Manipur Chief Minister N. Biren Singh to the Kangpokpi district on Friday, a low-intensity bomb exploded at Kangpokpi bazaar along the National Highway102.
Police authorities said that the incident occurred around 1:10 am near the post office, inflicting damage to a car parked near the blast site. The car belongs to the daughter of autonomous district council member of the district. However, no casualty was reported due to the blast.
Hemant Pandey SP Kangpokpi said- “We are not quite sure whether it was an actual bomb or some miscreants trying to create problems. We don’t know the motive behind the incident but we have started a full-scale investigation into the matter.”
Manipur CM and his cabinet were scheduled to inaugurate a market shed and accommodation centre for doctors and teachers followed by a cabinet meeting in the district passing through the route. The inaugural function was scheduled for 10 am.
Despite the blast, CM Biren and his cabinet went ahead with their planned event amidst heavy security measures.
Reacting to the incident, the Chief Minister asked the state police and paramilitary forces to find out the culprit and arrest them within a week. He warned the perpetrators not to test the patience of the government while strongly condemning the act.
“There was no room for violence in this society. Whatever the motive violence is not a solution to any problem but it would only ruin the image of the state”, added Singh.