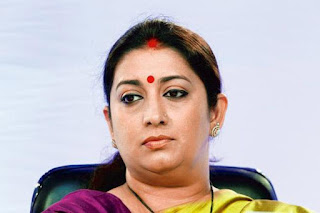 SHILLONG: Human Resources and Development Minister, Smriti Irani  on Tuesday announced setting up a separate department in the North Eastern Hill University (NEHU) to study the history, culture and philosophy of the tribes of the north-eastern states.
The Union minister also announced that a coaching centre would be set up at NEHU for SC/ST/Minority and female students to facilitate their entry into the services, for remedial coaching for their NET examinations and others.
“Even when we have a lot of tribes across the Northeast, I believe there has never been an attempt to institutionalise studies of tribal culture, history and philosophy. I am hopeful that in my conversation with the vice-chancellor of NEHU … will establish a separate department to study the tribal history, culture and philosophy,” Irani said addressing the 23rd NEHU convocation programme here in Meghalaya.
“I recognise today that northeast has a vibrant culture, a philosophy that can be much known across the nation and the world, and a history, which is rich in its contribution to mankind. But the challenge is do we have an institutionalised mechanism to study this history, culture and philosophy?” she added.
Irani said the proposed new department would attract students from across the world and rest of India who have keen interest to understand and document the socio, economic, political and cultural history of the north-eastern states.
Eulogizing NEHU, one of the premier central universities in India, for its best standards in providing quality education and research and developmental work,  Irani said, “ This university has a legacy, a legacy to preserved, a legacy to bring forth to the world and a legacy that will harbour of change not only in the North East but across the nation.”
In order to increase participation in ph.D programmes by women and by differently-abled students, the Union Minister revealed the centre’s decision to relax the time required for women and differently-abled students to complete their higher education to facilitate their increase participation.
“The Government of India has proposed that in the forthcoming commission of the University Grants Commission (UGC), it will give impetus to increase participation in ph.D programmes by women and by differently-abled students,” she said.
“We will ensure that instead of 2 years, women and differently-abled students be given 3 years to submit their Mphil certification. Additionally they will be given 8 years instead of 6 years for submitting their thesis,” Irani said.
Moreover, she also announced that maternity leave for women will be recognized and given without counting them in the days of study for over 240 days. “Women who have to migrate due to marriage will be given migration facilities to ensure they can pursue their ph.D anywhere in the country,” Irani said.
“The centre has requested UGC to recognized that particularly to increase participation of women and facilitating their ph.D, migration facilities be given to these women for pursuing their phD throughout the country,” she said.