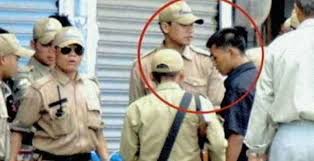 IMPHAL(IANS): The district and sessions court here on Wednesday told Chungkham Taratombi, mother of Chungkham Sanjit, a victim of an alleged extra judicial killing, that she could approach the higher court if she so desired.
M. Manoj, judge of the District and Sessions court, Imphal west said it in his verdict. The mother filed a petition, seeking another investigation in the light of the confession by a police head constable Thounaojam Herojit that following orders of a superior officer he shot dead Sanjit, an unarmed former insurgent who was overpowered.
The ruling was given on the second and final day of hearing on Wednesday. The Central Bureau of Investigation (CBI) counsel argued there was no need for further investigation. Taratombi in her petition pointed out that the head constable has publicly confessed to have killed her son due to the order from a superior officer.
Judge Manoj said a trial is going on in his court. But it does not have jurisdiction over the matter prayed for. It may be recalled that eight other policemen are facing trial in connection with the killing of Sanjit on July 23, 2009 in the heart of Imphal city.
A pregnant woman, Thokchom Rabina who was walking with her young son, was also killed by a bullet which hit her on the forehead. Police have not been able to solve the mystery of where that bullet came from.
On January 25, Herojit told some reporters that he shot dead Sanjit inside a pharmacy on the orders of a superior officer. The officer implicated in the crime had denied the charge as “malicious, concocted and motivated”. Herojit appeared in the court with his confession. He said, “I committed the crime and I am ready to accept any punishment”.
Meanwhile, Babloo Loitongbam, the executive director of Human Rights Alert, deposed before judge Manoj that he had supplied the photographs which tend to establish that the unarmed Sanjit was accosted in the street, pushed inside a pharmacy and his dead body was dragged out after some minutes.
He said, “I gave the photographs to the Tehelka magazine. But as per request of the photographer I am not disclosing his name.”
Union Home Minister Rajnath Singh had reacted to the confession of the fake encounter saying: “It is a serious matter and it would be looked into.”
Kiren Rijiju, the minister of state for home, said, “My department will instruct the Manipur government to provide security to the head constable.” Herojit, however, has not demanded any security guards and is staying on his own.