All charges against Irom Sharmila must be dropped 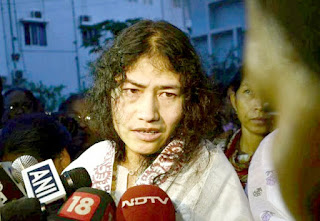 NEW DELHI: Amnesty International India welcomes a Delhi court judgment acquitting Irom Chanu Sharmila of charges of attempt to commit suicide. This is the second time Irom Sharmila has been acquitted of the charge of attempting suicide. On February 29, a Manipur court acquitted her of an identical charge and ordered her to be released.
Amnesty International Prisoner of Conscience Irom Sharmila has been on a prolonged hunger strike in Manipur for over 15 years, demanding the repeal of the draconian Armed Forces (Special Powers) Act. She was charged with attempting to commit suicide in Delhi in October 2006, when she staged a protest in the capital for two days.
The activist has never been convicted. However, as the offence is punishable with imprisonment for up to one year, she has been regularly released after completing a year in judicial custody, only to be re-arrested shortly after as she continues her fast. She is detained in the security ward of a hospital in Imphal, Manipur, where she is force-fed a diet of liquids through her nose.
Courts have now ruled four times in under two years that Irom Sharmila’s hunger strike is not an attempt at suicide. Irom Sharmila must be unconditionally released and all charges against her must be immediately dropped.